Our hearts go out to the people of Ukraine. We’ve been watching the news in horror these past few weeks as cities have been demolished and peoples’ lives have been destroyed. Musicians around the world have responded by using their art form to raise funds, send aid, and show solidarity with the Ukrainian people.

On March 6th, Russian-English pianist Petr Limonov led a flash mob of 200 classical musicians who played a trio of Ukrainian compositions in London’s Trafalgar Square. Violinist Jennifer Pike, one of the violinists who participated, was quoted in an article by The Guardian saying “At this time we are trying to do all we can for a horrific situation, and musicians only really know one way, which is to play."

Musicians gather in Trafalgar Square, London
Kostia Lukniuk, a Ukrainian violinist and recent graduate of the Eastman School of Music had to return home to his home country when his visa expired but he and his brother Markiian have been using their music to garner support for their country. They recently recorded a video that went viral on Facebook of the two of them playing a folk song to lift the spirits of those fighting to defend their country. The Facebook post included links to various organizations raising funds to support Ukraine.

During a trip to Washington DC, world renowned cellist, Yo-Yo Ma played in protest outside of the Russian Embassy next to a fake street sign that read Zelensky Way. Later that night during his performance at the Kennedy Center, he played the Ukrainian national anthem along with pianist Emanuel Ax and violinist Leonidas Kavakos. 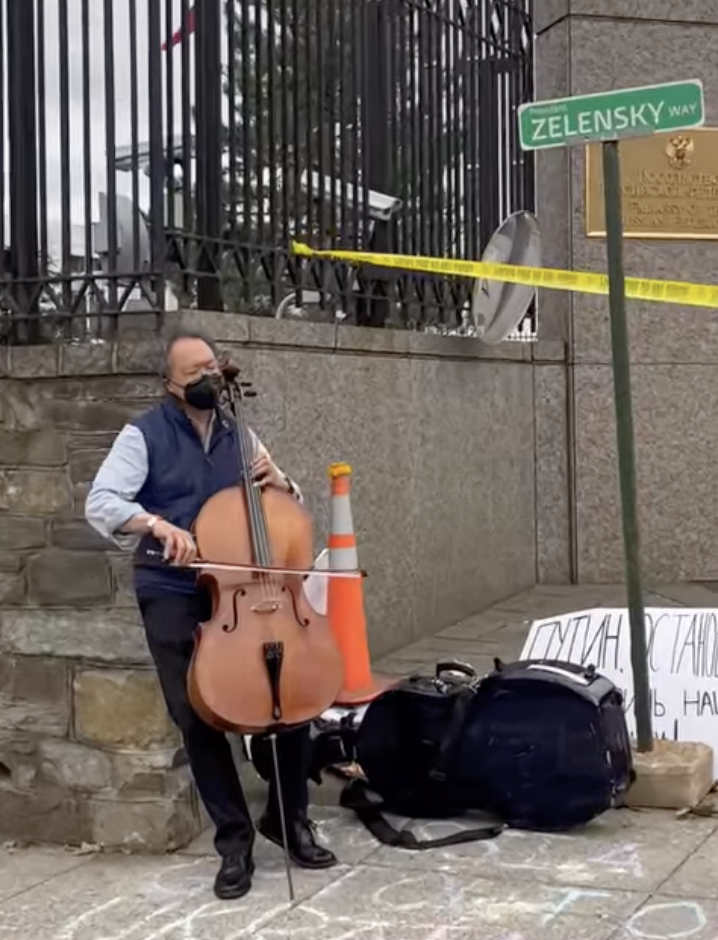 Yo-Yo Ma outside of the Russian embassy
The Royal College of Music and the Berlin Philharmonie are holding benefit concerts for Ukraine this week and the Royal Philharmonic Orchestra, the Oklahoma City Philharmonic, the Spokean Symphony Orchestra, and the Boston Youth Philharmonic are just a few of the orchestras from around the country and the globe that have been performing the Ukrainian national anthem during their concerts to show their support for Ukraine.
Locally, the Suzuki Virtuoso Academy in Garden City performed the Ukrainian National Anthem on Sunday, March 13th. Click here to see a video of their performance.

The outpouring from musicians around the world has been inspiring but probably most moving are some of the videos that have emerged of musicians in Ukraine playing while sheltering in place. A video emerged last week of violinist Vera Lytovchenko, who played for the Khakiv City Opera, playing a lullaby for the people who were sheltered together in her building’s basement. Another violinist, Illia Bondarenko, recorded himself playing an old Ukrainian folk song in his basement in between explosions. English violinist Kerenza Peacock reached out to him and organized a video (see Plucked from Youtube below) in which he is accompanied by 94 other musicians from 29 different countries.

Despite the current turmoil in Kyiv, On March 9th The Kyiv Classical Orchestra played Beethoven's Ode to Joy in an impromptu concert in Kyiv’s Maiden Square.
Filed in: Music for Peace, music news, Orchestra, Ukraine, Violin Music, War in Ukraine